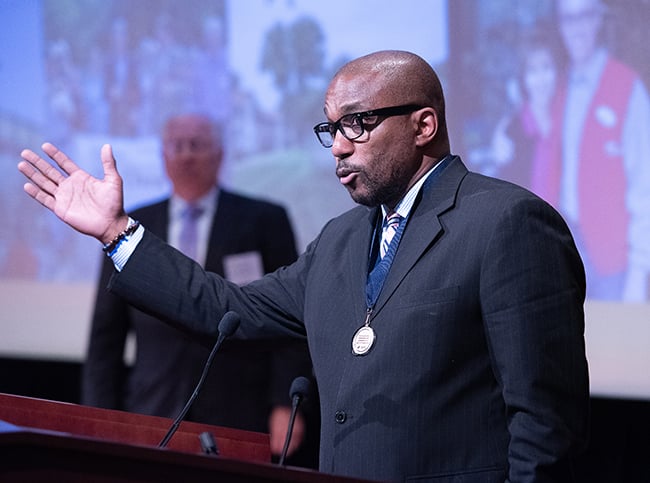 Arlington, VA (May 20, 2019) — National Cooperative Bank (NCB), a leading financial services company dedicated to providing banking products and services to cooperatives, their members and socially responsible organizations nationwide, named John Holdsclaw, Senior Vice President, Corporate Affairs for NCB, the recipient of the 2019 Stan Dreyer Spirit of Cooperation Award. The honor, presented each year at NCB’s Annual Meeting is bestowed to those who live and work with the spirit of the cooperative principles.

“For the past 18 years John has been committed to advancing the mission of the bank, working with like-minded organizations, such as Community Development Financial Institutions (CDFIs) and nonprofits to help NCB grow”, stated Charles E. Snyder, President and CEO of National Cooperative Bank. “He also has been instrumental in enhancing our employee engagement -most recently providing workshops for our employees on diversity, equity and inclusion”.

“I am truly humbled to receive this award”, stated John Holdsclaw. “Mr. Dreyer was a great cooperator and so influential in the creation of NCB and its mission that to receive an award that is adorned by his name and likeness is one of the highest honors of my professional career.”

The Bank carefully selects the yearly recipient of The Stan Dreyer Spirit of Cooperation Award, named for Mr. Dreyer to ensure it’s given to an individual or organization who lives the spirit of the cooperative principles. Mr. Dreyer, who passed away in 2017, was one of the people who was instrumental in the passage of the Congressional Bank Act in 1978 which created NCB. The award is bestowed annually on an NCB employee or member-customer whose devotion and contribution to the cooperative community emulate those embodied by Mr. Dreyer. Among his long list of accomplishments, Mr. Dreyer served as Executive Director of NCBA and, in that role was the premier advocate to Congress in helping to pass the National Consumer Cooperative Bank Act, which created NCB. Throughout his career, his dedication to fostering the growth and success of cooperatives, nationally and internationally, has earned him widespread recognition and an enduring legacy.