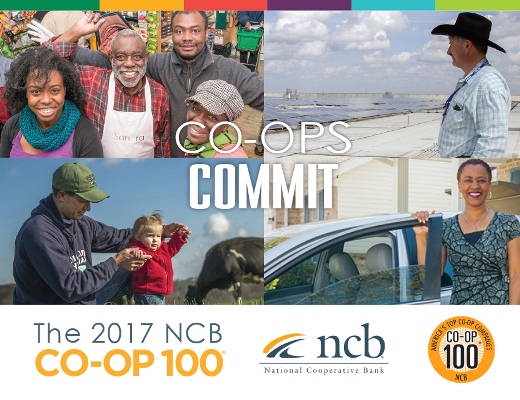 “The economic impact of cooperatives is critical to our economy”, stated Charles E. Snyder, President and CEO of National Cooperative Bank. “Cooperatives can be seen in just about every industry across America, including local food, finance, housing and energy. Whether it's bringing fresh local food through a food co-op or affordable home ownership through a housing cooperative, cooperatives help strengthen communities.”

This year’s theme for Co-op Month is “Cooperatives Commit.” In addition to ranking the top 100 co-ops by revenue, the report also highlights the many ways co-ops commit to their members, sustainability, education, impact, kindness and their community.

The following are the top revenue producers in 2016 for the NCB Co-op 100's main sectors:

CHS Inc., based in Saint Paul, Minnesota reported $30.3 billion in revenues in 2016 and maintained its first place position on the NCB Co-op 100 list.

Dairy Farmers of America, based in Kansas City, Missouri, reported $13.5 billion in revenues, earning the number two ranking this year.

Associated Wholesale Grocers, Inc., based in Kansas City, Kansas reported revenue of $9.2 billion and earned the fifth position on the list.

ACE Hardware, based in Oak Brook, Illinois earned $5.1 billion in revenue and came in at number nine on the list.

Do-it-Best Corp., located in Fort Wayne, Indiana earned the 12th place on the list, with $3.0 billion reported in revenue.

Navy Federal Credit Union, headquartered in Merrifield, Virginia, earned $5.4 billion in revenues and is number eight on the list.

CoBank headquartered in Greenwood Village, Colorado earned $2.8 billion and came in 14th on the list.

HealthPartners, Inc., located in Bloomington, Minnesota earned $6.0 billion in revenue and is seventh on the list.

Basin Electric Power Cooperative, located in Bismarck, North Dakota earned the 18th position with a reported $2.0 billion in revenue in 2016.

As a long-time advocate for cooperatives, NCB’s mission is providing critical financing to support the growth and expansion of cooperative businesses, while also deploying hundreds of millions of dollars to support underserved communities and cooperative expansion initiatives. NCB and other cooperatives named on the NCB Co-op 100® list continually work to the message out on the advantages of member-owned organization.

Cooperatives exist in a cross-section of sectors, including agriculture, grocery, hardware and lumber, finance, energy and communications, housing, and recreation among others. These co-ops provide over two million jobs and create more than $75 billion in annual wages with revenue of nearly $650 billion.