Frederick Douglass and Co-ops in 1846 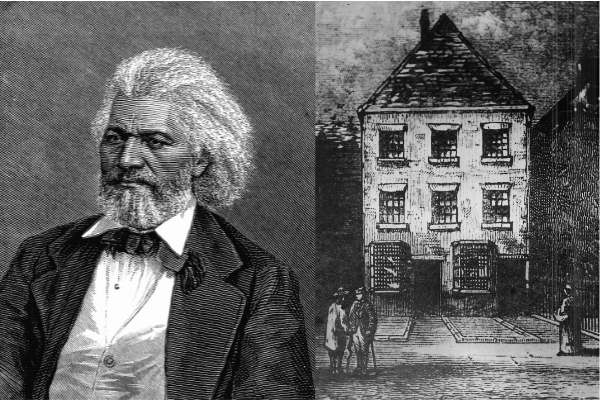 Frederick Douglass drew himself up to his height of just over 6 feet, looked out over the packed audience of over 1,000 - mostly millworkers - and vociferously and eloquently described his life as a slave in the United States of America. It was October 10th, 1846, and Douglass had just been warmly introduced by John Bright, a British Member of Parliament. Even at a young age, Bright had already emerged as one of the most powerful speakers in Britain against slavery. There was a sold-out house in the Public Room on Baillie Street in Rochdale, Lancashire, England.

Douglass used his time to educate the engaged Rochdale audience about his life as a slave and slavery itself in the United States. Douglass spoke at the Public Hall in Rochdale in 1846, five times between October 10 and 14, and twice more on November 10 and 11. On October 12, Douglass returned to Manchester to speak to 4,000 people at the Free Trade Hall, and then returned to Rochdale.

Frederick Douglass was 28-years-old and had just published his first book: ”Narrative of the life of Frederick Douglass, An American Slave.” Because the book was an instant best seller in the U.S., and because the press identified the public places where Douglass spoke, Douglass was at grave risk of immediate arrest. Douglas had fled to Britain because his American owner, Thomas Auld, had announced that he intended to capture Douglass and return him to forced slavery. William Lloyd Garrison, the leading American Abolitionist, had accompanied Douglass to Rochdale, and also spoke at each of the October meetings.

Surely among the audience at the Public Hall in Rochdale that night and during the other speeches that Douglass gave that week in Rochdale, were some of the founders of the first modern co-op. The tiny store opened by the Rochdale Pioneers at 31 Toad Lane was about a three-minute walk away from the Public Room on Baillie Street. All of the original 28 members of the Rochdale Equitable Pioneers Society were heavily engaged in the social and political change of that era. Every Sunday, many of Rochdale’s co-op founders and members attended the non-conformist churches, such as Methodist, Unitarian, and Baptist chapels. Here, they would have heard sermons on the evils of slavery. These local activists had started the Co-op in 1844, to change their daily circumstances. Every day at work in the mills or walking on its streets, the Rochdale Pioneers were recruiting other millworkers to join their co-op.

John Bright was an early supporter of the ‘self-help’ philosophy of the Rochdale Pioneers and occasionally spoke in Parliament about the accomplishments of his local Co-op. Bright supported changes in the law that gave cooperatives greater financial power. Additionally, Bright spoke highly of the co-ops’ ability to be democratic while running a business. Bright noted in his 1854 diary that he was to visit the co-op to check on its progress. Bright used the example of the Rochdale Equitable Pioneers Society to sway other members of parliament in favor of extending the vote to working men.

Bright’s’ brother, Jacob Bright, was also a strong supporter of cooperatives. In the 1850s he was appointed as an arbitrator of the Co-operative Manufacturing Society and the cooperatively run Corn Mill. Subsequently, Jacob Bright became the first elected Mayor of Rochdale.

During his almost three-year stay in Britain (1845-1847), Douglass gave roughly 300 public speeches in many different towns and cities in Britain. Many of his speaking engagements and stays were hosted by a strong network of Quakers, John Bright, being one of them. Bright had arranged for Douglass to speak in Rochdale on seven different occasions in 1846 alone. Douglass was also a regular guest at “One Ash,” the Rochdale home of John Bright and his family. In “The Life and Times of Frederick Douglass,” page 235, Douglass writes about his first visit to England (1845-1847), “I was, besides, a welcome guest at the home of Mr. Bright in Rochdale and treated as a friend and brother among his brothers and sisters.”

Beginning in August of 1846, Ellen Richardson, a Newcastle Quaker, engaged in raising funds from her circle of Quakers to buy Frederick Douglass out of slavery. As a result of Douglass’ stay with John Bright in Rochdale, Bright immediately contributed one-third of the money needed to purchase Douglass from his American slaveholder. In October of 1846, Douglass arrived in Rochdale a fugitive slave. With Bright’s contribution, however, Douglass left Rochdale about to become a free man. Ellen Richardson wrote that with the gift of Bright, they were certainly going to be able to pay the price for Douglass’s freedom from slavery.

By December 1846, Bright and the other Quakers learned that the sale was almost complete. Towards the middle of December, Frederick Douglass learned by steamship mail that as of December 12, 1846, Douglass was no longer legally a slave in the USA, and his papers of manumission had been confirmed. On December 22nd, 1846 Douglass wrote a reply to a letter written on December 12th by Henry C Wright. Wright was a fellow abolitionist who occasionally spoke on the same platform as Douglass. Douglass was cautious about being allied with him as Wright was a fiery speaker with more radical views than Douglass. Wright had written to Douglass severely critiquing him for allowing people to buy him as a slave. From the content of each of the letters, it is evident that both Wright and Douglass know that Douglass is being freed. At the time, Douglass was staying twelve miles away from Rochdale at 22 St Ann’s Square, Manchester.

Frederick Douglass remarked on March 30, 1847, at a farewell banquet at the London Tavern in London:

- I do not go back to America to sit still, remain quiet, and enjoy ease and comfort. . . I glory in the conflict, that I may hereafter exult in the victory. I know that victory is certain. I go, turning my back upon the ease, comfort, and respectability which I might maintain even here. . . Still, I will go back, for the sake of my brethren. I go to suffer with them; to toil with them; to endure insult with them; to undergo outrage with them; to lift up my voice in their behalf; to speak and write in their vindication; and struggle in their ranks for the emancipation which shall yet be achieved.

In his conclusion, Douglass states; "I came here a slave, but I go back free.”

On April 2, 1847, Douglass stayed with John Bright in Rochdale - the day before he sailed from Liverpool back to America for the first time in his life as a free man.

Douglass arrived home in the spring of 1847. He sailed early Sunday, April 4. The last night of his stay abroad was spent as the guest of John Bright and his sisters. From no one in England could Douglass have received a more gracious welcome and friendly benediction than from this great commoner. “Frederick Douglass: A Biography by Booker T. Washington,” (p 65). Originally published: Philadelphia: G.W. Jacobs, 1906.

The linking of Frederick Douglass, John Bright, Rochdale, and the first modern co-op began in 1846. The link between cooperatives and the campaigns against slavery, and for civil rights continues strongly to this very day and for eons to come.

This linkage can be divided into two different eras;

1. Anti-Slavery and Co-ops
Frederick Douglass’ sojourn in Britain in 1845-1847, occurred during the same years that consumer and worker cooperatives were being born all over Britain. The Chartist movement might have been stalled by Parliament, but the struggle for local democratic change carried on in the form of cooperatives. Many of the British Chartist leaders who welcomed Douglass to speak were also engaged in building different types of cooperatives. Due to their strong interest in building democratically owned local institutions, many cooperatives emerged in the same towns where Douglass spoke.

Not only did Douglass speak in Rochdale, the English cradle of the cooperative movement, but Douglass had also spoken earlier in Fenwick, on April 6, 1846. Fenwick is the Scottish birthplace of the Fenwick Weavers (1761-1839), an early model of cooperatives. It was an era of societal change which sought democracy and abhorred slavery of any kind. The audiences that came to hear Douglass wanted to build the same slavery-free world that Douglass spoke of. The fledgling cooperative movement was an ardent activist in the British fight against slavery everywhere. In the West Indies, the last bastion of British Slavery did not end until 1838.

While in Britain, Douglass was introduced to other efforts to obtain democratic rights. The British Chartist leader, the Irish born Feargus O’Connor led the actions to create cooperative land societies. Members would buy shares in a land cooperative that would use the combined funds to buy land and then by lottery allocate parcels of the land to the members. The intent was to create a parcel of land of the value that would give the member the right to vote. Thousands of democratic activists bought shares in these Chartist Cooperative Land Companies and a number of the Rochdale Pioneers were among them.

Since Douglass spoke, on occasion, on the same platform as O’Connor during his stay in Britain, Douglass would have learned of the Chartists’ property path to democracy. Douglass also often spoke on the same platform as Herrington, and these Chartists later played a role in evangelizing about working people needing to start cooperatives. There is a possibility that Douglass may have visited one of the Chartist colonies (Heronsgate?) to see how the parceling of property had created a number of voting free-holders.

John Bright was the first president of the similar efforts of the Rochdale Freehold Society. In 1850, the society bought 24 acres of land in Rochdale which was then divided up into 500 pieces of land for houses that would create over time 500 new voters in the town. There is an area of Rochdale today still called Freehold centered on Freehold Street. Extending the vote to the middle and working classes would energize new political parties that would later change the face of British politics.

During his lengthy sojourn in Britain (1845-47) while staying in London, Douglass was often the guest of John Bright and stayed at the Reform Club on Piccadilly.

There is a second possibility of Frederick Douglass and Charles Howarth, (one of the original 28 founders of the Rochdale Pioneers and its second President) being in the same room at the same time. It is documented separately that in 1847, Douglass and Howarth were each in the House of Commons in the “Strangers Gallery” (a balcony with three narrow rows of seating for guests and visitors) to hear John Bright speak on the Ten Hours Bill. What has not been possible to confirm if it was on the same date.

2. Chronology of Support for the US North in the Civil War (1861-65): The Role of Douglass, Bright, Rochdale, and Cooperatives